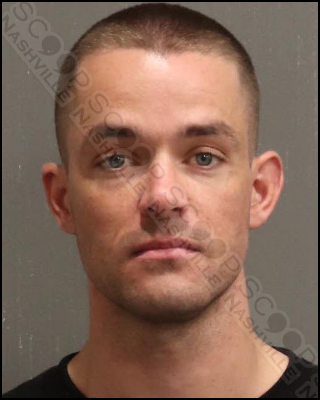 Metro Nashville Police responded to a domestic disturbance late Saturday night on Laurel Street, where the victim, Jasmine McDowell, fled to for her safety. She told police that her husband, 27-year-old Nashville Attorney Ryan McDowell, punched her in the face after making threats to her in the vehicle while she was driving. She says the couple had left an event, and Ryan was drunk and making derogatory comments toward her while she was driving them home. She was able to record part of the interaction which captured him threatening to “punch you in the chin, and your brain would be dead!” Jasmine says once the car was in park he hit her in the face. She fled to her sister’s home and contacted police, who issued a warrant for his arrest. He was booked into custody the following afternoon.

Ryan McDowell of Summit Ridge Circle in Nashville, TN, was booked into the Metro Nashville Jail on August 14th, charged with domestic assault with bodily injury. He is free on a $1,500 bond.