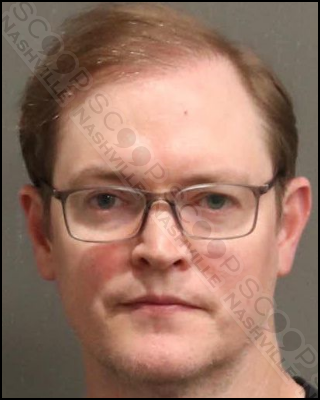 Metro Nashville Police were flagged down near West End and Cherokee Ave just after 11 p.m. Monday in response to a man asleep behind the wheel of a vehicle at a stop sign. The man, identified as 46-year-old William Haywood Routon, had just woken up and sped away at a high rate of speed, according to the woman who was flagging them down. Officers caught up with Routon as he drove toward his family’s $3 million estate on Ebenway Drive. He admitted to drinking “3 IPAs at a friend’s home” prior to driving and performed poorly on field sobriety tests. He was transported to booking and charged with DUI.

William Haywood Routon was booked into the Metro Nashville Jail on August 16th, charged with driving under the influence and violating the implied consent law. A judicial commissioner set his bond at $2,500, and the Davidson County Sheriff’s Office gave him pre-trial release from their facility.