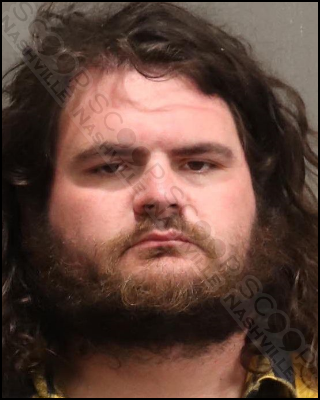 Downtown Nashville bouncer 30-year-old Brandon Chapman, or as he describes himself, a “professional adult chaperone,” was inexplicably found sleeping it off in the kitchen of the Omni Hotel at 3:14 a.m. on Friday, June 29th. Security attempted to wake him up and when he eventually realized where he was at told them he would leave when he was ready. He reportedly then became combative and lunged at the victim, Andrew Delobel, several times and grabbed his jacked, throwing him to the ground. The victim suffered minor injuries from the assault. Chapman was issued a citation and failed to self-book on the assault charge. A bench warrant was then issued for this arrest, and he was taken into custody early Tuesday morning.

Brandon A. Chapman of Waters Edge Lane in Hendersonville, TN, was booked into the Metro Nashville Jail on August 16th, charged with assault. A judicial commissioner set his bond at $1,000, and the Davidson County Sheriff’s Office gave him pre-trial release from their facility.