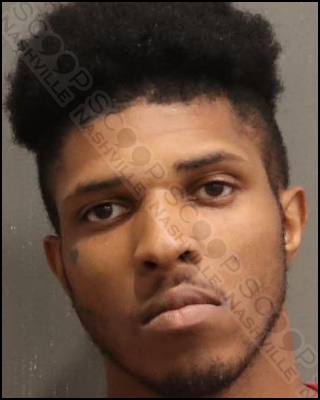 22-year-old Jordan Evans was booked into the Metro Nashville Jail this weekend, charged with the aggravated rape of a 2-year-old girl. Previously, Evans was charged with the statutory rape of a 15-year-old runaway juvenile he harbored in 2021. District Attorney Glenn Funk ended up not prosecuting that case. He is held in lieu of a $150,000 bond on the new charge.

Police say the two-year-old victim arrived at Vanderbilt pediatrics on August 13th with bleeding coming from the female child’s anus. There was a substantial tear on the anus going toward the vaginal area consistent with penetration by force, according to the doctors.

Jordan is the boyfriend of the child’s mother. He initially stated he heard a loud bang and went to check on the child and noticed blood in the diaper. He contacted the mother and stated he wasn’t sure why there was blood, but picked her up, and they brought the child to the hospital.

During an interview with police, Evans initially told the same ‘loud bang’ story, but later added that his finger may have slipped when he was changing her, and his fingernail cut her. As the interview continued, he later said he was just checking her anus to make sure she could properly “poop” and admitted to sticking his finger into the child’s anus and tearing through her skin. He further stated he noticed that she was maturing and growing, and he was just “checking her.”

Jordan L Evans was booked into the Metro Nashville Jail on August 14th, charged with aggravated rape of a child. A judicial commissioner set his bond at $150,000.