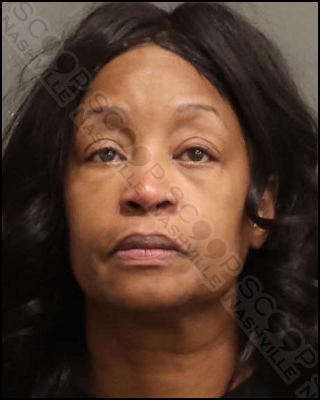 Just after 9 p.m. Wednesday, Vanderbilt University Police responded to the Nashville Marriott Vanderbilt on West End after a guest had reported hearing a domestic disturbance coming from an adjacent room. Hotel staff confirmed the yelling and screaming coming from a third-floor room, and officers spoke with the registered guest, 54-year-old Yolanda Matthews. She advised she and her husband had a verbal disagreement, and she was going to go back inside her room and drink the remainder of her lemon drop as her husband was already outside the hotel. While police spoke to her husband, Yolanda came downstairs and was irate with hotel staff and patrons. She was advised to return to her room; instead, she turned to her husband and screamed, “You MuthaF**ka, you did this!” and threw herself onto the ground in front of officers. She was collected from the floor and transported to booking.

Yolanda Matthews of Plumbrook Drive in Farmington Hills, MI, was booked into the Metro Nashville Jail on August 17th, charged with public intoxication and disorderly conduct. A judicial commissioner set her bond at $200, and the Davidson County Sheriff’s Office gave her pre-trial release from their facility.