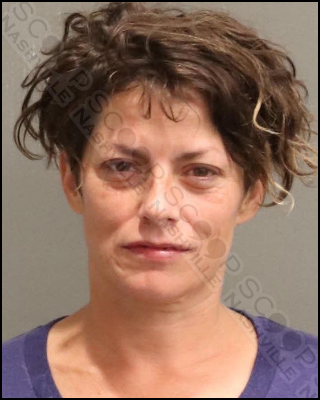 Metro Nashville Police Officers working the Entertainment District Initiative in downtown Nashville were flagged down by citizens on the sidewalk outside of Jason Aldean’s Kitchen + Rooftop Bar, where an altercation was taking place between two tourists from Chicago, 45-year-old Lori Ann Haarmann and her husband, 48-year-old Eric Frostick. Multiple witnesses report Eric was pulling and hitting his wife while attempting to force her into a rideshare vehicle. Bouncers from the bar report her holding onto the railing and refusing to get into the vehicle with her husband while fighting back against his assault. Eric denied any altercation when police arrived and told officers his ripped shirt and scratches on his body occurred “when we were having sex… that is how it happened.” Officers first arrested Eric for domestic assault and public intoxication, and then due to Lori’s level of intoxication and inability to care for herself, she was also charged with public intoxication.

Lori Ann Haarman & Eric Frostick, both of Chicago, IL, were booked into the Metro Nashville Jail on August 14th. Each was charged with public intoxication, and Eric Frostick also faces a domestic assault with bodily injury charge. Eric is free on a $1,600 bond, and Lori was released after an 8-hour sober hold with her charge dismissed.