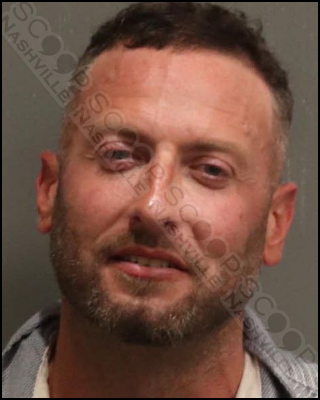 39-year-old Brad Price and his friend Cody Stout, who were both visiting from Ohio, were kicked out of a Broadway bar Saturday evening and returned later in the night, attempting to re-enter the bar while causing a disturbance with staff. Security alerted police, who attempted to place Price into custody for trespassing. He initially walked away from officers and then attempted to place a $20 bill in the pocket of the arresting officer in an attempt to walk away from the situation. During a search incident to arrest, a white powdery substance believed to be cocaine was located in a baggie in Price’s pocket.

Bradley Allen Price of Garrison Street in Fremont, OH, was booked into the Metro Nashville Jail on August 20th, charged with drug possession, public intoxication, and criminal trespass. A judicial commissioner set his bond at $1,200 bond, and the Davidson County Sheriff’s Office gave him pre-trial release from their facility.