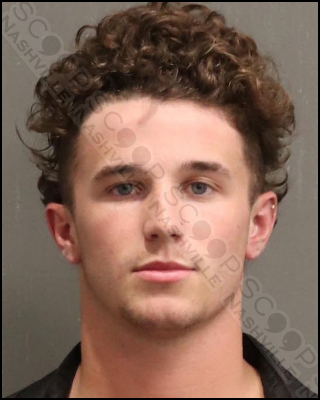 19-year-old Kayden Blackwell, better known to his nearly 1 million fans on TikTok as ‘@itsskbbb‘, and to his OF followers as ‘lillboyjohnny,’ was jailed in Nashville early Sunday morning after brawling on Broadway. Metro Nashville Police Officers working the Entertainment District Initiative in downtown Nashville were alerted to a fight in progress at 301 Broadway, where Blackwell was in a fight with Jack Zuckowsky. Officers observed Blackwell punch Zuckowsky, and they pulled him away from the tussle and placed him into custody. Blackwell reeked of alcohol and was spotted earlier in the evening drinking and accompanied by Tayler Holder at points during the evening’s escapade.

Kayden Blackwell of Martinique Drive in Orange Beach, AL, was booked into the Metro Nashville Jail on August 21st, charged with public intoxication and disorderly conduct. A judicial commissioner set his bond at $3,000, and the Davidson County Sheriff’s Office gave him pre-trial release from their facility. He is scheduled to appear in court on September 30th.