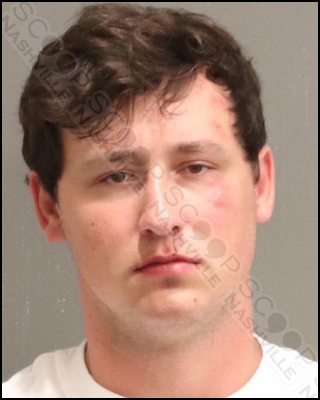 24-year-old Jack Zuckowsky was jailed in downtown Nashville in the early hours of Sunday morning after he was observed in a fight with Kayden Blackwell, a well-known creator on TikTok and OnlyFans. Metro Nashville Police officers working the Entertainment District Initiative came upon the disturbance on Broadway and say Jack was so intoxicated he was unable to comprehend simple questions. As neither party wished to prosecute for assault, Zuckowsky was transported to booking and charged with public intoxication.

Jack Thomas Zuckowsky was booked into the Metro Nashville Jail on August 21st, charged with public intoxication. A judicial commissioner set his bond at $100.

Zuckowsky is the son of Kerndt & Theresa Zuckoswky of Nashville and the founder of ghost company Social Summit, which he often boasts about in paid placement tech articles but doesn’t seem actually to exist past a grandiose idea. A lawsuit was filed last week alleging that last year Zuckowsky came into possession of approximately $40,000 in BTC (bitcoin) during a transaction he wasn’t entitled to and refused to return the funds.