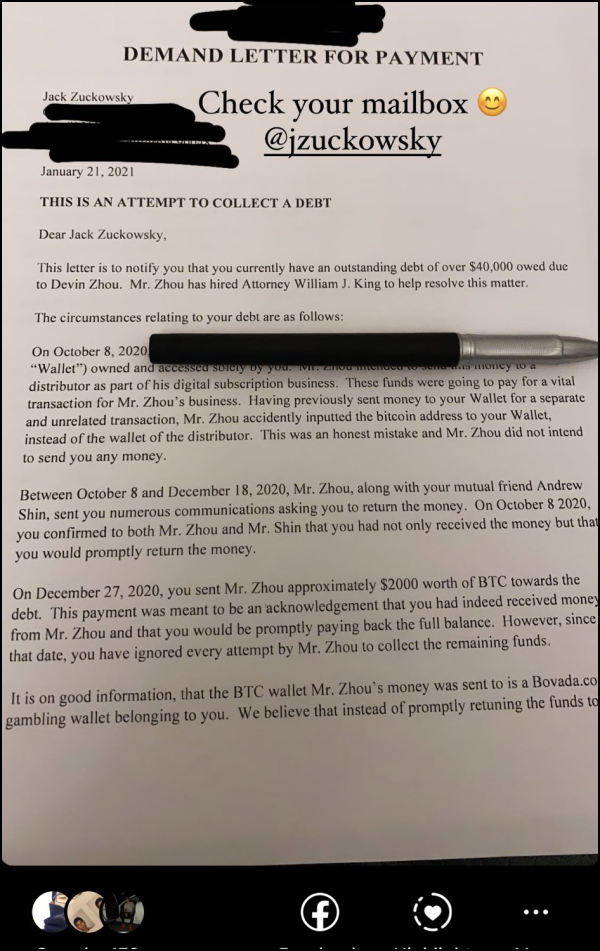 In a newly filed lawsuit in Nashville, New York resident Devin Zhou says he sent nearly 1.3 BTC (Bitcoin) to the wrong Bitcoin wallet in October of 2020. Instead of the intended recipient, Zhou says he accidentally sent the equivalent of around $27,000 (at the current value) to Nashvillian & founder of ghost company “Social Summit” Jack Zuckowsky by selecting the last person he had sent money from his ‘recent’ transactions instead of inputting the wallet address of the intended recipient. In addition to the value of the bitcoin, he is being sued for an additional $15,000 related to not returning the money. The lawsuit alleges he voluntarily returned a fraction of the money after prior requests were made to him.

Zhou also posted a demand letter on social media previously, which appears to have been mailed to Zuckowsky. When reached for comment on this story last week, Zuckowsky told Scoop: Nashville, “I have never talked to this guy in my life.”

Zuckowsky was arrested this weekend after a fight on Broadway in downtown Nashville. Attorneys involved in the case did not respond to requests for comment.