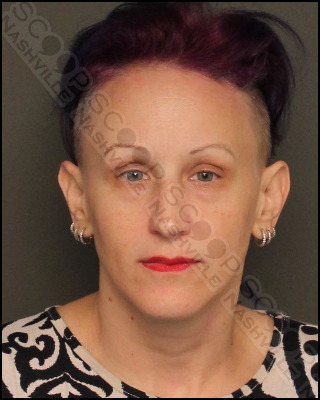 45-year-old Jamie Morgan self-booked this week on a citation charging her with the theft of campaign signs of MNPS School Board candidate Todd Pembroke. Police say that after repeated thefts, a tracker was placed inside some of the signs by the campaign, and they were tracked to her address on Anchorage Drive. Police accompanied the candidate to the pinged location and issued her a citation, and retrieved dozens of signs. During that visit, Morgan lifted her shirt and flashed the candidate, made obscene gestures, and caused quite the scene, which was captured on video (below, in story). Morgan stated she did this for “political reasons.” On her social media, Morgan describes herself as a “Nashville based bipolar pagan intuitive; rape, sexual abuse, trauma survivor; retired drunk trying to be a better mom.”

Jamie Morgan of Anchorage Dr in Nashville, TN, was booked on the citation on August 17th, charging her with theft of property – $1000 or less. She is scheduled to appear in court in October.