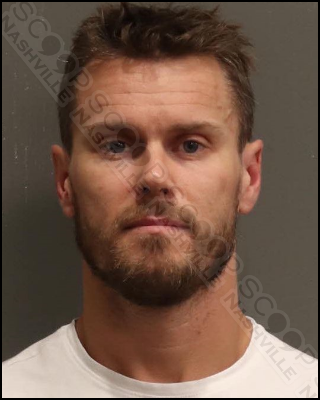 Metro Nashville Police responded to an active burglary alarm at a home on 7th Ave North in downtown Nashville just before 3 a.m. Wednesday. The homeowner reported the man, identified as 36-year-old Matthew Edward O’Connell, was attempting to get into his home. O’Connell, who is a bartender at Jason Aldean’s bar downtown, was extremely intoxicated but explained he believed this was the house he was supposed to be at to visit a woman he had been seeing. Officers had Nashville Fire medics respond to the scene, but Matt O’Connell refused any assistance or transport. Unable to care for himself, he was transported to booking and charged with public intoxication.

Matthew Edward O’Connell was booked into the Metro Nashville Jail on August 24th, charged with public intoxication. A judicial commissioner set his bond at $500.