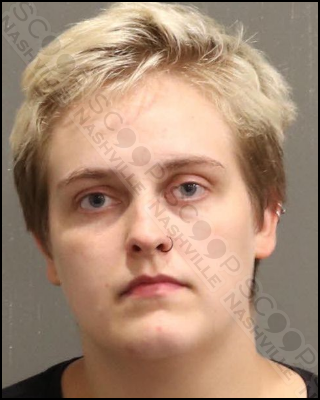 Metro Nashville Police were patrolling the parking lot of the Super 8 motel in Hermitage in the early hours of Wednesday morning when they observed a vehicle parked in the rear parking lot with two people inside, one of which was the driver, 22-year-old Meredith Wickstrom. As officers approached the vehicle, they observed a rolled joint in the center cupholder, and the male passenger had a grinder in his hand. Wickstrom consented to a search of the vehicle, which yielded 16 grams of mushrooms, 10 grams of marijuana, a black scale, and several baggies – all in a fanny pack with Wicktrom’s state-issued ID. She claimed those were not her drugs in her fanny pack with her ID.

Meredith Wickstrom of Banbury Xing in Brentwood, TN, was booked into the Metro Nashville Jail on August 24th, charged with felony possession with intent to distribute a schedule I drug and unlawful usage of drug paraphernalia. She is free on a $6,000 bond.