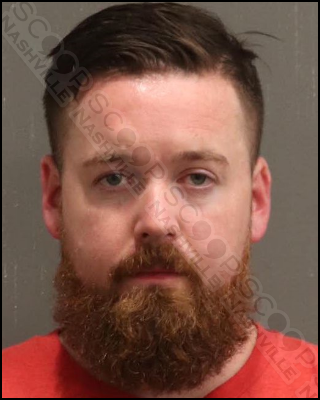 Metro Nashville Police working the Entertainment District Initiative in downtown Nashville Saturday responded to a fight call at the JW Marriott on 8th Ave S. and found 33-year-old Jacob Thibodeau, who they described as “very belligerent and verbally aggressive” to officers and staff. Thibodeau ripped off his shirt and yelled, “I am a Marine Corps Veteran!…” followed by “he needs his f***** a** kicked!…” in response to a citizen whose vehicle was damaged in a separate incident at the same location. The staff also showed police a video of Thibodeau starting a fight with another individual prior to their arrival. He was warned to stop yelling, screaming, and making threats but was not hearing any of the suggestions and remained disorderly. Officers eventually arrested him and transported him to booking.

Jacob Thibodeau of Obryan Street in Goodlettsville, TN, was booked into the Metro Nashville Jail on August 28th, charged with disorderly conduct. A judicial commissioner set his bond at $100, and the Davidson County Sheriff’s Department gave him pre-trial release from their facility.