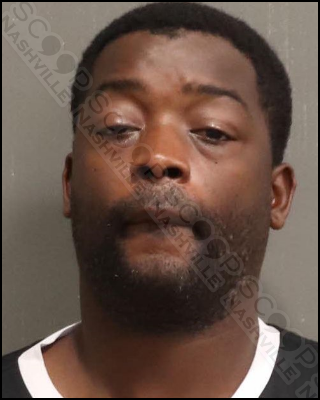 Metro Nashville Police say they used an undercover detective at 7:30 p.m. Tuesday to approach 35-year-old Fredrick Antwain Burns in downtown Nashville to attempt to buy $20 worth of marijuana. Burns walked a block away to his vehicle and drove it back to the undercover detective to serve him. In exchange for the $20 bill, he handed the detective a small plastic bag with 1 gram of suspected marijuana inside. As he pulled off, a unit pulled him over to arrest him, and detectives believe that Burns ate the $20 of buy money as they were unable to locate it elsewhere.

In a statement about the arrest, the department says, “last night’s arrest was part of the continuing undercover narcotics investigation downtown, which primarily focuses on Fentanyl seizures. Undercover detectives were working towards a larger purpose when the marijuana buy was made, however, when Fredrick Burns, 35, of Paris, Tennessee, is alleged to have eaten the buy money, he was physically arrested. Had he not allegedly tampered with the evidence he likely would have been cited.”

Fredrick Antwain Burns of Paris, TN, was booked into the Metro Nashville Jail on August 30th, charged with possession or casual exchange. He was released on his own recognizance (ROR).