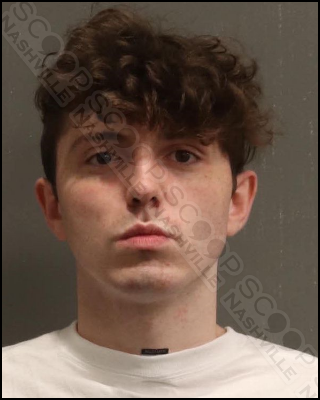 Metro Nashville Police say 32-year-old Samuel Blackwell drank approximately 9 Jack & Coke drinks at the Kelsey Dixon Comedy Night at Twin Kegs 2 late Thursday. After the show, he was traveling home on I-40 with his girlfriend, Brayden Ezell, driving. She says he became “irrationally upset” with her, and she stopped the vehicle in the middle of a lane of traffic on the interstate. Blackwell exited the vehicle and began running away from the vehicle, which is when officers arrived to find him running down a lane of travel in the direction of the next exit. Blackwell was detained and determined to be extremely intoxicated. He was transported to booking and charged with public intoxication.

Blackwell, who once attempted to be a bespoke wardrobe designer in Nashville, had his mugshot taken with his shirt on backward with the tag peeking out in the front.

Samuel Blackwell was booked into the Metro Nashville Jail on September 2nd, charged with public intoxication. A judicial commissioner set his bond at $100.