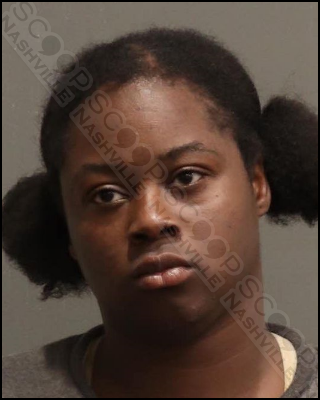 31-year-old Taneka Hayden remains jailed on a $51,000 bond after police say she stabbed her boyfriend, Jacob Reimann, in the back with a green kitchen knife at the Sonic on Dickerson Pike, which officers eventually retrieved from her bra and it was blood-covered. The victim says the couple has been dating for approximately four years, and while they were at Sonic, a car drove by and someone inside it “cat called her using a racial slur.” She believed her boyfriend was taking up for the person in the vehicle and began to assault Reimann with punches to the face and then almost immediately stabbed him in the back, as confirmed by witnesses at the location. During an interview, Hayden claimed the stabbing was in self-defense, claiming he had punched her first, but witness accounts disputed this version of events.

Once she was in custody and in the back of a patrol car to be transported, Hayden repeatedly spit all over the back seat of the cruiser, adding a vandalism of government property charge to her evening.

Taneka L. Hayden was booked into the Metro Nashville Jail on September 2nd, charged with vandalism of government property over $2500 and aggravated assault with a deadly weapon. A judicial commissioner set her bond at $51,000.