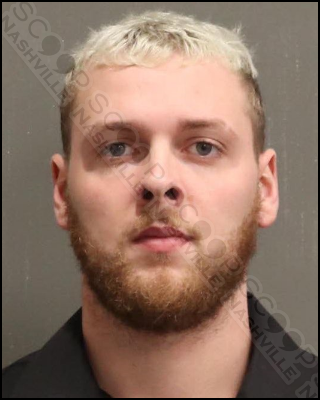 Olivia Corneto says she drove her boyfriend, 23-year-old James Blake Milliken, to his Bellevue apartment from a bar downtown on August 1st, just before 2 a.m. She confronted him about his frequent volume of alcohol consumption, and the two argued. She had enough and began to leave his residence when he followed her and tried to get back inside her vehicle. She says he kicked and punched the doors while yelling and cursing at her. Three doors on the vehicle sustained damage, including dents. Officers documented smears and footprints all over the vehicle and viewed a video of a portion of the incident as Milliken fled when he realized he was being recorded. A warrant was issued for his arrest, and he was booked on the felony vandalism charge this week.

James B. Milliken of Bellevue Rd in Nashville, TN, was booked into the Metro Nashville Jail on September 6th, charged with vandalism over $1,000. A judicial commissioner set his bond at $5,000.