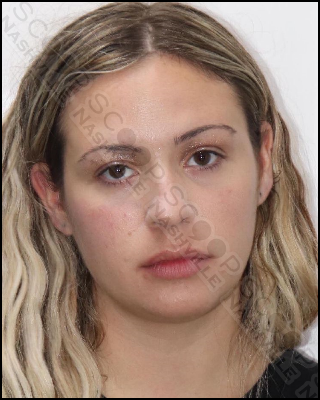 25-year-old Alexandra Savage was in charge of the #BrideTribe this weekend, which traveled to Nashville to celebrate the upcoming wedding of Hailey Cooper and Will Hewett. As the chief planner of the bachelorette brigade, she created a vibrant social media campaign to #BuyHerAShotShesTyingTheKnot and #HypedToBeAHewett, complete with a graphics package and associated Venmo account. The party arrived in Nashville and continued to the Valentine on Broadway Saturday night, where security eventually asked Savage to vacate the premises due to her extreme level of intoxication and ‘over the topness.” She initially left but returned moments later and was detained until Metro Police took her into custody, charging her with public intoxication and criminal trespass.

Alexandra Joan Savage of Mount Ephraim, NJ, was booked into the Metro Nashville Jail on September 11th, charged with public intoxication and criminal trespass. A judicial commissioner set her bond at $1,200, and the Davidson County Sheriff’s Office gave her pre-trial release from their facility.