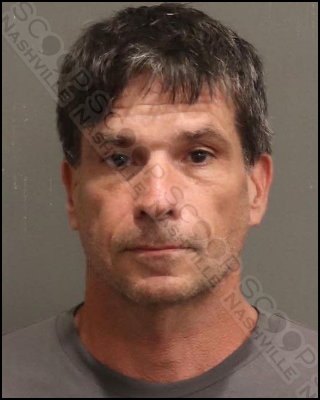 Robert ‘Bob’ Pizzitola and his wife Susan own ‘Nashville Party Barge’ which operates as one of the largest party bus companies in downtown Nashville, some of which cater specifically to bachelorettes and mural tours. An undercover operation by the Tennessee Alcoholic Beverage Commission (TABC) revealed Robert, who is a veteran, traveling to the commissary at Fort Campbell, KY, and purchasing large amounts of untaxed alcohol. He would then sell the liquor on his Nashville party bus tours without any license to sell alcohol and without paying any taxes. Detectives say the couple had bought approximately $30,000 in untaxed liquor and transported it back to Tennessee for resale without a permit or license.

It all started with a tip from Fort Campbell Detective Paul Davis, who became interested that the married couple was buying large amounts of liquor from the commissary, in such frequency and quantities that it had to be special ordered. TABC Special Thornton Vaughn traveled to Fort Campbell to conduct surveillance as Pizzitola picked up one of the shipments on September 7th and was also provided with evidence about prior transactions, photos, and videos from prior pickups. On this day, he loaded approximately twenty boxes of André champagne onto a truck and then followed him as he crossed the state line back to Tennessee.

Feeling that enough evidence had been gathered, the agent was ready for the second part of the operation and prepared an anticipatory search warrant that included an advertisement for the upcoming ‘Mural Party Barge Mimosas Tour,’ an event that would happen on September 9th. Judge Lynda Jones reviewed and signed a search warrant, and now the buy/bust portion of the operation would begin.

Special Agent Vaughn purchased tickets for Nashville Party Barge’s Mimosa Mural tour – which explicitly stated that alcohol was included in the price of the $44 ticket, but only deep inside the event page, while the front page still stated that all tours were ‘BYOB’ — something that would turn out to not be true for the Nashville party bus company. Had the city’s transportation licensing commission (TLC) taken even one tour to check for compliance, this would have been evident, but from records available over the weekend, it appears this simply never happened.

As the city is currently redefining rules and regulations for the party busses, the next Mayor will have a lot of input into the future of the party bus industry in Nashville. Mayoral candidate and current Metro Council Member said about Pizzitola’s arrest: “We worked hard to create a regulatory framework governing numbers, locations, and -yes- alcohol for these vehicles, and it’s disappointing to see a service that’s clearly having no difficulty making money working so hard to avoid the rules.”

TABC Special Agents Hardin & Sakarapanee used the tickets for the Murals Mimosa Tour on September 9th and went undercover on the Nashville party bus. Once they received their drinks from the party bus employees, the other agents involved in the operation were notified, and the bus was boarded by agents. Employees were notified they were selling alcohol without a license, and they called the owner, Robert Pizzitola, who immediately came to the bus. As he arrived, he was notified he was under arrest for selling alcohol without a license and transporting untaxed alcohol (from his return trip from Fort Campbell).

Pizzitola was then served with a copy of the search warrant for the premises of the Davidson Street office of Nashville Party Parge, and it was executed forthwith. A search of the premises resulted in the seizure of 14 boxes of Andre champagne and 163 individual bottles of the same brand. A THP Trooper transported Pizzitola to booking for processing. At the time of publication, party buses from Nashville Party Barge were still operating and members of the TLC had not responded to requests for comment.

Robert Pizzitola of Nashville, TN, was booked into the Metro Nashville Jail on September 9th, charged with felony transport of untaxed alcohol and unlawful sale of alcoholic beverages. A judicial commissioner set his bond at $2,500, and the Davidson County Sheriff’s Department gave him pre-trial release from their facility.