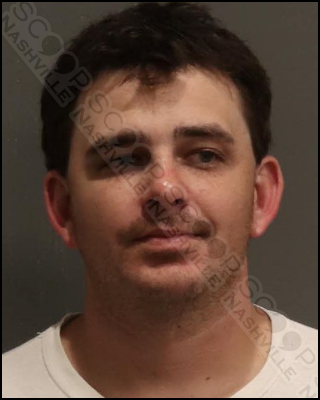 Metro Nashville Police received a call Saturday that a vehicle crashed downtown at 4th & Deadrick, and the involved parties were being “disorderly” in the street. Officer arrived to find 30-year-old Kevin Meyers and his girlfriend Kaitlin Pharris outside the car, which he had just driven into a utility pole. Witness Mike Moore says he watched the couple get into the car, and it quickly took off at a high rate of speed and crashed. Kaitlin told police the couple had been downtown drinking, and she told him not to drive, but he was persistent. Kevin says he was arguing with his girlfriend and “pushed the gas pedal a little too hard,” causing the crash. Police say Kevin reeked of alcohol and charged him with DUI.

Kevin Meyers of West Clarke Blvd in Murfreesboro, TN, was booked into the Metro Nashville Jail on September 10th, charged with implied consent violation and driving under the influence (DUI). A judicial commissioner set his bond at $2,000, and the Davidson County Sheriff’s Office gave him pre-trial release from their facility.