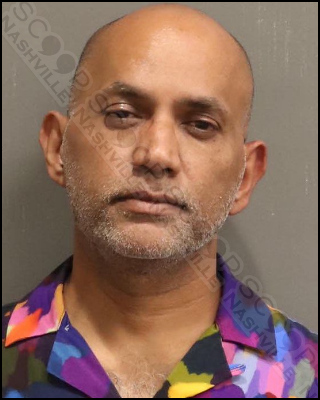 51-year-old Rajiv Vyas of Lebanon, TN, refused to leave a downtown business at 100 Broadway despite multiple demands from both the management and police. He had become disorderly and was disrupting other guests, and by the time police arrived, he was “irate” with security at the location. He eventually looked at the police officers and said, “arrest me, or I’m going back upstairs!” Officers obliged, and he was charged with criminal trespass.

Rajiv Vyas of Ridgecrest Lane in Lebanon, TN, was booked into the Metro Nashville Jail on September 17th, charged with criminal trespass. A judicial commissioner set his bond at $100.