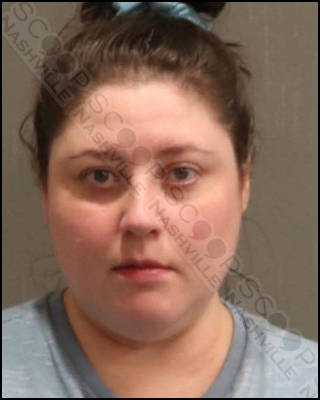 Knight Stivinder of Nashville’s “fixer” firm MP&F Strategic Communications says one of her senior leadership employees, 35-year-old Amanda Reinbold, is “… one of the very best when it comes to getting you in the news… or keeping you out of it.” That sentiment didn’t hold true to her own actions, though, after Metro Nashville Police say they found Reinbold half naked in a DUI car crash in West Nashville late Thursday night.

Just after 11:30 p.m. Thursday, officers were dispatched to a single-vehicle automobile accident to find Amanda Reinbold in the driver’s seat of her crashed 2007 Toyota Highlander. She reportedly smelled of alcohol and was unable to answer simple questions, appearing lethargic and sometimes unresponsive. She was unaware of how the accident occurred and was not wearing any pants. Officers observed a large towel wrapped around the bottom half of her body. She admitted to drinking “one beer” approximately four hours earlier.

Amanda K. Reinbold of Sloan Rd in Nashville, TN, was booked into the Metro Nashville Jail on September 23rd, charged with driving under the influence (DUI) and an implied consent violation. A judicial commissioner set her bond at $1,500, and the Davidson County Sheriff’s Office gave her pre-trial release from their facility.

A biography from MP&F states, “Amanda is a board member of Nashville youth literacy nonprofit Book’em and is on the leadership committee for the South Nashville Chamber of Commerce. Her past civic involvement includes the Cystic Fibrosis Foundation of Middle Tennessee’s annual Nashville’s Top 30 Under 30 award, the Nashville Business Incubation Center, and the Nashville Adult Literacy Council.”