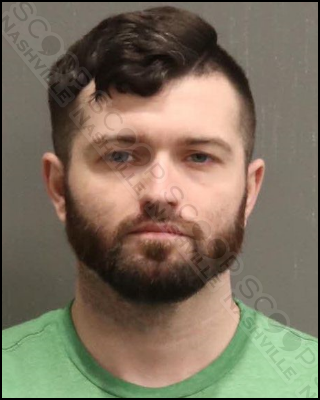 Zelma Alexander says she was in her Jeep in the 2300 block of Charlotte Pike when she observed a white male in a tank top and jeans, later identified as 30-year-old Logan Pierce Martin, assaulting a white female, Calista Bruner, who was wearing a black shirt and skirt before he fled in a blue Nissan Altima. What led up to this brutal beating of a lover involved the Twelve Thirty Club, Layer Cake, Whiskey row, and the Lucky Bastard Saloon…

Calista told police during an interview that she got off work at the Twelve Thirty Club around 10:30 p.m. when she met Logan Martin, who is a co-worker from her other job at Layer Cake. The two, who had an intimate relationship for approximately four weeks, met at the Pinnacle parking garage around 11:15 p.m. The couple talked for approximately fifteen minutes until he disclosed he had feelings for another woman.

Calista left and went to Layer Cake to hang out with her friends and co-workers. She was reportedly ‘distraught’ over the breakup, and at around 2 a.m., she says Logan appeared at Layer Cake and tried to dance with one of her friends. All members of the friend group, including Logan, decided to go to Whiskey row, but it was closed, so they ended up at Lucky Bastard Saloon. As the night was winding down, most of the group was going to a private home to continue the evening, and she agreed to let Logan walk her to her vehicle as she was leaving.

During the walk back to her car, which Logan had knowingly parked beside, she says a black male wearing a white t-shirt driving a white truck stopped to check on her as a rouse while taking her cell phone from her. It is currently unknown if Logan and this man knew each other.

Calista eventually agreed to get in Logan’s Nissan Altima so he could drive her home, but as the verbal argument escalated, she fled from the vehicle just four blocks before her home, with Logan following her while screaming, “you’re being a fucking child!” Near 23rd Ave N & Charlotte Ave, he left his vehicle and came toward her getting “chest to chest” with her, causing her to be in fear of injury. The two pushed each other and made threats, and Logan grabbed her by the neck with one hand while slamming her to the ground with the other while demanding she says she was sorry, with his knee on her chest, as observed by the witness.

Calista was transported to the hospital for treatment, and warrants were issued for the arrest of Logan Pierce Martin as he had fled the scene before the officer’s arrival.

Logan Pierce Martin of Woodbrier Lane in Greenbrier, TN, was booked into the Metro Nashville Jail on September 22nd, charged with aggravated assault with strangulation. A judicial commissioner set his bond at $10,000.