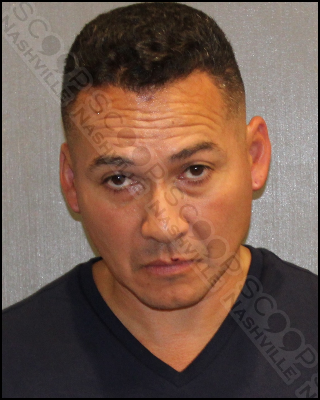 Metro Nashville Police Officer Jaren Breece responded to a fight call at Dierks Bentley’s Whiskey Row on Broadway in downtown Nashville to find 44-year-old Rhiannon Jacklin Martinez ending her fight with another patron, and he advised her to leave the property. She cursed toward the other involved party and began to leave but turned back around and continued to instigate the fight further. She was extremely intoxicated and unable to care for herself, so she was arrested for public intoxication and disorderly conduct. As she was being placed into custody her husband, 51-year-old Ralph Martinez, began to interfere with her arrest and was advised to stop. As he continued to interfere after being given chances to walk away, he was also placed into custody and charged with disorderly conduct and public intoxication.

Ralph Martinez of W 97th Lane in St John, IN, was booked into the Metro Nashville Jail on September 18th, charged with disorderly conduct and resisting arrest. A judicial commissioner set his bond at $1,000.

Rhiannon Martinez of W 97th Lane in St John, IN, was booked into the Metro Nashville Jail on September 18th, charged with disorderly conduct and public intoxication. A judicial commissioner set her bond at $1,000.