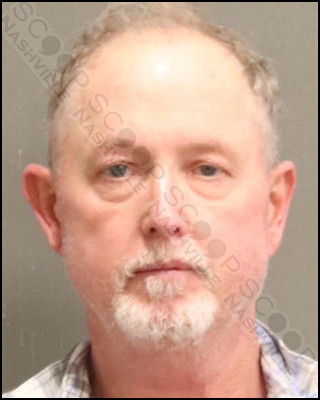 53-year-old Jody Samford faces two counts of aggravated assault with a deadly weapon after he pulled a handgun on a couple who rented a room from him and stated, “you’re about to get your black ass shot!” The victims, Calvin Foxx and Princess Scott, were recently told they needed to move out of the home, and Princess was having a discussion with Jody’s wife, Pamela Samford, near the front door of the home on October 1st. Calvin exited the bedroom after hearing the two talking and noticed Jody Samford was holding a black and purple handgun, which he says was pointed at her, and overheard Samford make the verbal threat to Princess. Calvin says Jody then pointed the handgun at him and stated, “you will be leaving one way or another!” Jody’s wife would never admit to witnessing him pointing the handgun but eventually confirmed her husband did own a black and purple pistol. One of Pamela Samford’s social media profiles from 2021 has the tagline of “Mature couple ready for playing.”

Jody Samford was booked into the Metro Nashville Jail on October 1st, charged with 2 counts of aggravated assault with a deadly weapon. A judicial commissioner set her bond at $10,000.