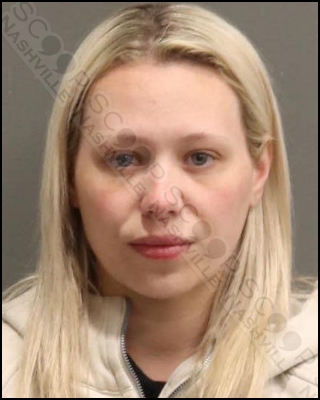 29-year-old Jazmine Nicole Russell is charged with domestic assault with bodily injury of her boyfriend of two years, Seth Larson, after a neighbor called police about the commotion coming from their apartment. Police separated both parties, and Seth explained he was in bed and Jazmine was in the living room when she went through her phone and became upset, accusing him of lying. She then began to strike his back and neck, leaving visible injuries. Jazmine told police she only grabbed him to keep him from walking away when she talked to him. Though Seth did dot not want to prosecute, due to the injuries and the domestic relationship, Jazmine was determined to be the primary aggressor and taken into custody.

Jazmine Russell of 11th Ave North in Nashville, TN, was booked into the Metro Nashville Jail on October 20th, charged with domestic assault with bodily injury. A judicial commissioner set her bond at $1,000.