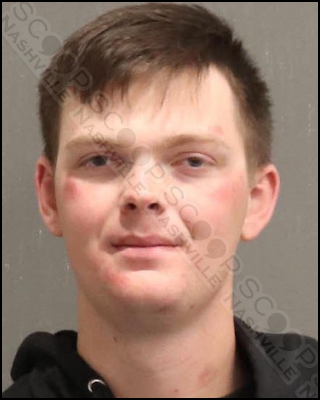 21-year-old Jonathan Patrick Becnel was sitting on the ground outside of Nudie’s Honky Tonk when officers working the Entertainment District Initiative stopped to check on his welfare as he appeared very intoxicated and unable to care for himself. Becnel was unable to stand on his own, and as officers attempted to get him to medics, he began to push and get away. He was then taken into custody and charged with public intoxication and resisting arrest as he was combative during the entire encounter. Once at booking, DCSO staff refused to accept Becnel due to his extreme level of intoxication, so he was then taken to Metro General Hospital via ambulance.

Jonathan Patrick Becnel of Parsonage Rd in Hammond, LA, was booked into the Metro Nashville Jail on October 15th, charged with resisting arrest, assault of an officer, and public intoxication. A judicial commissioner set his bond at $2,100.