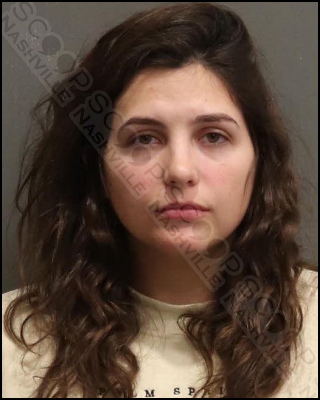 27-year-old Abigail Smith, who is a paramedic with the Nashville Fire Department, was screaming for help from a balcony of a Pine Street apartment just before 11 p.m. Monday. Officers arrived and met with her husband, Nicholas Wood, who motioned to his wife on the balcony. Officer Kirtley attempted to speak with Smith, who was holding the doors closed to prevent any interaction. The door was eventually opened, and Smith was reportedly extremely intoxicated and ranted about being filmed. She claimed she felt unsafe but would not elaborate on anything further.

Meanwhile, officers spoke to her husband, the victim, who said he was suddenly attacked by his wife, causing his shirt to be ripped and leaving scratches on his neck and shoulder. A video of the incident was made available from a cell phone, which shows the victim with a cut and him stating she had cut him. The video also shows him telling his wife she’s too intoxicated to go anywhere, resulting in her picking up a wine bottle and moving toward him. She then grabs him by the hair and hits him multiple times on the head until he is crying. She also grabbed a knife in an attempt to harm her husband, but he placed her in a bear hug to stop the assault.

Abigail Smith was booked into the Metro Nashville Jail on October 25th, charged with aggravated assault with a deadly weapon. A judicial commissioner set his bond at $3,500.