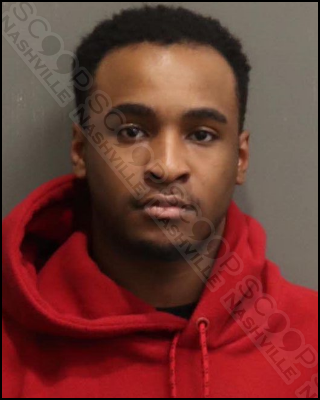 Police say 21-year-old Darius Adams crashed a black Cadillac Escalade just after 4 a.m. Monday near Charlotte Pike and River Road. Adams was found asleep in the driver’s seat of the vehicle, which was blocking a lane of travel, and the engine was running. An open can of Cayman Jack was in the center console, and Darius Adams told officers he had come from Play Dance Bar, where he drank a shot of fireball and other shots that men bought for him. He performed poorly on field sobriety tests and blew a 0.136% BAC on a breathalyzer.

Darius was born and raised in Nashville, Tennessee, and is a Music Major at Tennessee State University. He graduated from Whites Creek High School with multiple positions such as Student Director, Drum Major, and School Ambassador. Darius plans on going to graduate school to attain his master’s degree in Conducting. Darius is also a member of Phi Mu Alpha Sinfonia, the National Association for Music Education, and Phi Eta Sigma. He also held many positions in Phi Mu Alpha, such as Vice President, Secretary, Alumni Relations Officer, and currently serves as President. He arranges music and has granted multiple ensembles to play his arrangements.

Darius J. Adams was booked into the Metro Nashville Jail on October 31st, charged with driving under the influence (DUI). A judicial commissioner set his bond at $1,000, and the Davidson County Sheriff’s Office gave him pre-trial release from their facility.