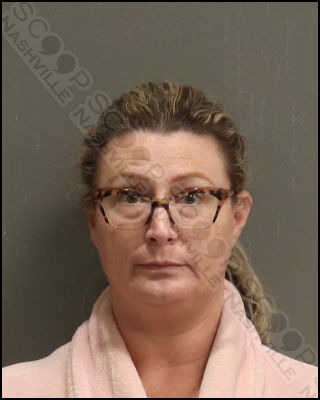 Curtis Patel was returning to his car, which he had parked in the alley near 8th Ave South, when he was suddenly confronted by 45-year-old Angela Hurt Gordon was irate and yelling and screaming about him parking “in her spot.” As Curtis got into his car to leave, she threw something at his windshield and kicked the side of his vehicle. She went back inside, and as he backed out of the area, a Belmont security officer made contact with him. While they were speaking, Angela came back out of her house holding a revolver, which she pointed in the air and threatened to shoot him. She began a backward countdown from 10, causing Curtis to flee the immediate area as police arrived to observe Angela still armed and screaming.

Angela C. Hurt of 18th Ave S in Nashville, TN, was booked into the Metro Nashville Jail on November 5th, charged with aggravated assault with a deadly weapon. A judicial commissioner set her bond at $10,000.