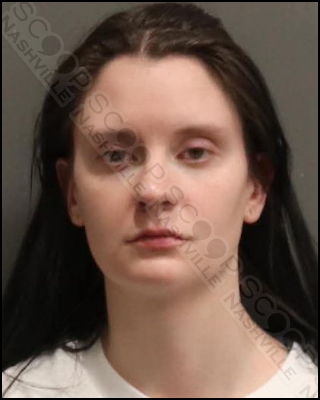 Police say they found around twenty 50ml “vodka shooters” in the crashed vehicle of 25-year-old Katherine Webb after she crashed into a block wall on Reynolds Road Saturday evening, deploying all of her airbags. Webb was still inside the vehicle and refused to open or unlock her doors. First responders had to break out a window to enter the vehicle and get her transported for medical treatment. Webb claimed she only had 2 shots of vodka earlier but did not consume any of the “vodka shooters” inside the vehicle. She performed poorly on field sobriety tests and was charged with DUI.

Katherine R. Webb of Harbor Lights Dr in Nashville, TN, was booked into the Metro Nashville Jail on November 5th, charged with driving under the influence. A judicial commissioner set her bond at $2,500.