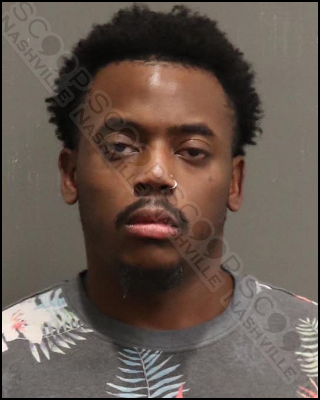 Police say 31-year-old Tevin Hamilton was at The 5 Spot bar with a gun on in the early hours of Tuesday morning. Officers arrived and met with a witness who stated that after the altercation, they witnessed Hamilton exit the bar, and he appeared to be again looking for the other person that was involved while carrying a gun in his waistband. The witness was able to negotiate for the gun and hold it until the police arrived so that no one would get injured. Officers arrived and located Hamilton inside the bar and extremely intoxicated and had two loaded Glock magazines in his pocket. As he was being transported to be charged with public intoxication and possessing a firearm in a bar, Hamilton told officers he lived nearby and offered $20 to let him out and walk home. Hamilton insisted on being let out of the car and raised his offer to $50 to let him walk home.

Tevin U. Hamilton of 3rd Ave N in Nashville, TN, was booked into the Metro Nashville Jail on November 8th, charged with public intoxication, bribery of a public servant, and possession of a firearm in a bar. A judicial commissioner set his bond at $35,100.