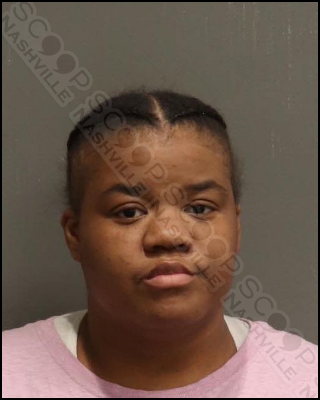 29-year-old Jasmine Clark is charged with the felony aggravated statutory rape of her alleged lover, a 17-year-old male victim. The age difference between the two is eleven years and 17 days. The victim says he met Jasmine in November 2021 and dated until February 2022, and had sexual relations approximately every other day. Witnesses confirmed the victim would sleep in the bedroom with Jasmine in the apartment they shared; however, Jasmine claims she made him sleep on the floor. Officers were made aware of the relationship when Jasmine completed a report with MNPD stating the two were in a relationship after she was transported to Skyline Hospital. She also claimed to believe he was 21 or 19 years old.

Jasmine Dytrenae Clark was booked into the Metro Nashville Jail on November 10th, charged with aggravated statutory rape. A judicial commissioner set her bond at $5,000.