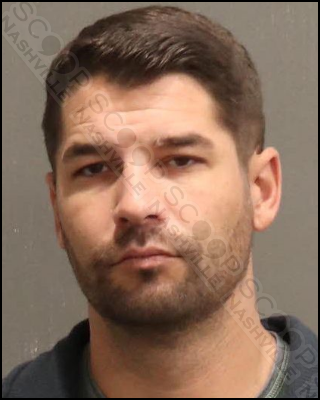 39-year-old David Danforth is charged with the domestic assault of his girlfriend, Andrea McCall, after she presented to Vanderbilt Hospital with severe lacerations and bruising. A neighbor initially made a 911 call reporting that the victim was seen spitting up blood outside of her apartment and requested a welfare check. When police encountered her at the emergency department, she disclosed that Danforth, who is her boyfriend, was intoxicated and spilled wax inside their shared apartment. She says he is an alcoholic, and he became irate and stuck his fingers in her mouth, leaving lacerations inside the back of her throat. She says he also kicked her in the leg, leaving a bruise on her upper thigh. A warrant was issued for Danforth’s arrest, and he was booked early Monday morning.

David B. Danforth of Woodmont BLVD in Nashville, TN, was booked into the Metro Nashville Jail on November 14th, charged with domestic assault with bodily injury. A judicial commissioner set his bond at $2,000.