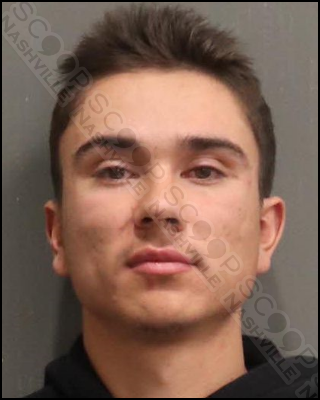 24-year-old Justin Martin was found asleep on the 3rd floor of the Lentz Public Health Center on Charlotte Pike in the early hours of Friday morning before the building opened. Security located him and called Metro Nasvhille Police, and Officer Martin Brown responded to the building and attempted to wake the man up from his slumber. It eventually took several sternum rubs to wake him up. He was assisted out of the building, and multiple attempts were made to get him to a different safe location; however, he could not remember the passcode for his phone or what hotel he was staying at. After declining all medical services and him too intoxicated to leave on his own, Martin was transported to booking and charged with public intoxication.

Justin Jeffrey Martin was booked into the Metro Nashville Jail on November 18th, charged with public intoxication. A judicial commissioner set his bond at $50.