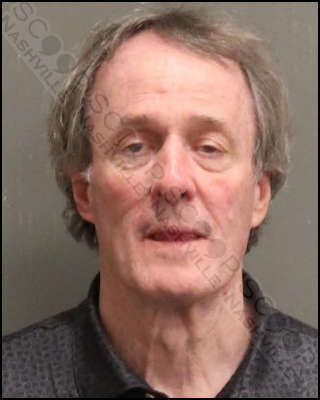 68-year-old Jonathan Tree was found unconscious behind the wheel of his running car at the main entrance to Green Hills Mall in the early hours of Sunday morning. Officers approached after he didn’t respond to loudspeaker commands and eventually woke Tree, who had trouble putting the vehicle in park. Once the loud music was turned down, Tree stated he was coming from a restaurant in Franklin and was on his way to a hotel. Tree stated he only had “one beer” several hours earlier in the evening. He added that he had not slept much since his flight landed in Nashville. He performed poorly on field sobriety tests and was taken into custody. A Glock 19 was located in the center console of the vehicle. During the transport to jail, Tree continuously yelled profanities, then repeatedly apologized and told officers he would sue them for this arrest.

Jonathan D. Tree of Grove Court West in Germantown, TN, was booked into the Metro Nashville Jail on November 20th, charged with possessing a handgun while under the influence and driving under the influence. A judicial commissioner set his bond at $3,000.