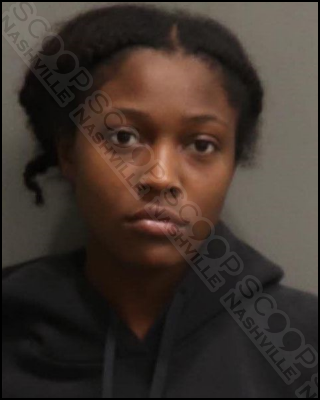 Metro Nashville Police say 19-year-old Kelexis Batson, along with several other women, showed up at a North Nashville where her cousin, Taylor Conyers, was pumping gas. As the women exited their vehicle, Conyers was fearful and locked herself inside her vehicle. Batson and Conyers had an ongoing dispute about “some words said about Batson’s daughter,” according to police. Video from the store shows Batson then jumped on the hood of the victim’s vehicle while yelling and screaming while the other women surrounded it. Conyers eventually exited the vehicle, and the two fought. Officers arrived and took Batson into custody, charging her with domestic assault.

Kelexis K. Batson of Tisdall Drive in Whites Creek, TN, was booked into the Metro Nashville Jail on November 20th, charged with domestic assault with bodily injury. A judicial commissioner set her bond at $5,000.