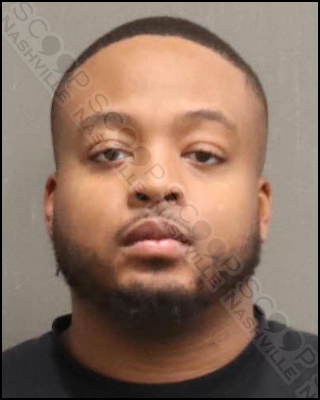 Airport Police made contact with 28-year-old Anthony Sloan, who was manning a controlled gate at an outside construction area of the Nashville International Airport for Archangel Protective Services. During the conversation, Sloan reportedly had a strong odor of marijuana coming from the vehicle he was sitting in. Inside the vehicle, officers found 2.4 ounces (68 grams) of loose marijuana flower in the back seat within a large plastic bag which the officer believes was the type used to package marijuana by the pound. A handgun was located in a bag in the front seat, along with a scale. The Tennessee Department of Commerce says Sloan applied for an unarmed security guard’s license on September 15th, which was denied based on a material misstatement on his application.

Archangel Security did not reply to a request for comment on this story before publication.

Anthony L. Sloan of Mountain Springs Rd in Antioch, TN, was booked into the Metro Nashville Jail on December 7th, charged with possession of a weapon during the commission of a dangerous felony, unlawful use of drug paraphernalia, and possession of a schedule VI drug with intent. A judicial commissioner set his bond at $9,000.