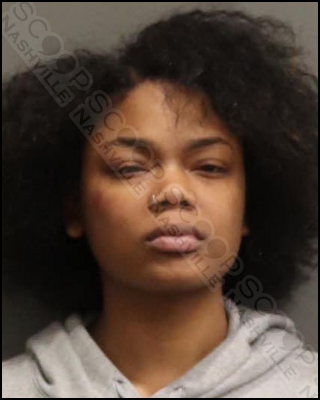 Police responded to an incident at Stonewood Apartments on December 5th and met with Brandon Blevins, who showed officers a video of 20-year-old Derrinae Alacia Douglas punching him. During an argument, she attempted to get into his room while he was attempting to keep her out and demanding she leaves. She eventually got into the room and when she realized she was being recorded, punched him in the throat.

Derrinae Alacia Douglas of Lafeyette St in Nashville, TN, was booked into the Metro Nashville Jail on December 5th, charged with domestic assault with offensive/provocative conduct. A judicial commissioner set her bond at $1,000.