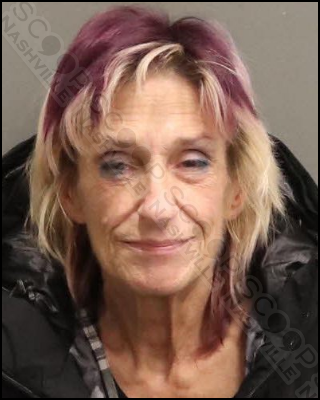 59-year-old Melissa Gay McClain pulled a loaf of swirl bread, a Clifty Farm ham, a NY Strip steak, and a boneless beef ribeye from her purse after she was caught shoplifting on December 10th at a Clarksville Pike Kroger in Nashville. Loss prevention initially observed her taking the items and passing the self-checkout area. She stated she was low on food at home and only had $3 on her food stamp card, so she was forced to steal the food to eat. The loss prevention officer, Latosha Michelle Hall, called Metro Nashville Police, who asked if she wanted to prosecute for the crime. She stated she was a contracted 3rd party employee for Kroger, and she personally wanted to prosecute for the theft, signing a private protection warrant. McClain is free on a $1,000 bond.

Melissa Gay McClain was booked into the Metro Nashville Jail on December 10th, charged with theft of merchandise. A judicial commissioner set her bond at $1,000.