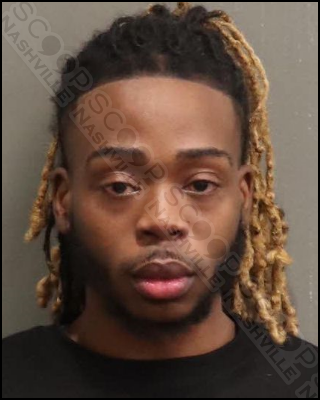 30-year-old Robert Holmes crashed his vehicle near Dickerson Pike and Grace Street late Friday night and admitted to consuming alcohol earlier in the day. Social media posts show Holmes drinking with friends at a restaurant just prior to driving. Responding officers say he smelled of alcohol and had trouble standing and speaking coherently. After performing poorly on field sobriety tests, Holmes was taken into custody. A subsequent inventory search of his vehicle prior to towing resulted in the seizure of 9.39 grams of marijuana in a Tupperware container.

Robert L. Holmes of Lenore Street in Nashville, TN, was booked into the Metro Nashville Jail on December 31st, charged with driving under the influence (DUI) and drug possession. A judicial commissioner set his bond at $2,500, and the Davidson County Sheriff’s Office gave him pre-trial release from their facility.