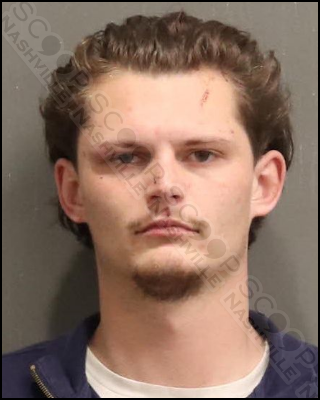 Police say 22-year-old Hudson Harrell crashed his 2016 Infiniti Q50 on I-24 in the early hours of Monday morning after drinking in downtown Nashville. He told police he was “unsure” how his car ended up in a ditch but stated he consumed “1-2 drinks” prior to driving. He performed poorly on field sobriety tests, and after he was under arrest, he repeatedly asked to take more tests. Once at booking, they granted his wish with a breathalyzer, on which he blew a 0.180% BAC, more than double the legal limit to drive.

Hudson Harrell of Hillwood Blvd in Nashville, TN, was booked into the Metro Nashville Jail on January 2, charged with driving under the influence (DUI). A judicial commissioner set his bond at $1,500, and the Davidson County Sheriff’s Office gave him pre-trial release from their facility.