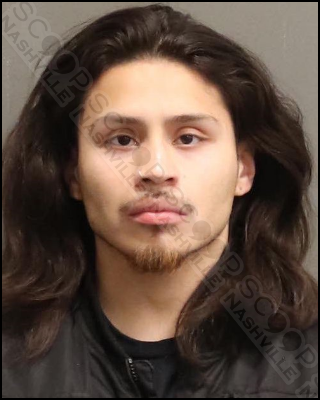 25-year-old Angel Sanchez is jailed in lieu of a $25,000 bond after police say he strangled his girlfriend, Yasmin Rivera, in an Uber and then, after they got home, reportedly headbutted her, dragged her across the floor, and strangled her again. The victim says the fight began at a bar but didn’t turn physical until they were in the rideshare vehicle on their way home. During the ride, she says he pulled her into his forehead and placed his hands around her neck until she had difficulty breathing. Once at home, she grabbed her dog for comfort, and Sanchez grabbed her and dragged her across the floor before getting on top of her and placing both hands around her neck once again. The victim says she was losing consciousness but was able to scream loud enough for a neighbor to come to her rescue. Officers documented multiple injuries to the victim.

Angel Sanchez was booked into the Metro Nashville Jail on January 1st, charged with aggravated assault/strangulation. A judicial commissioner set his bond at $25,000.