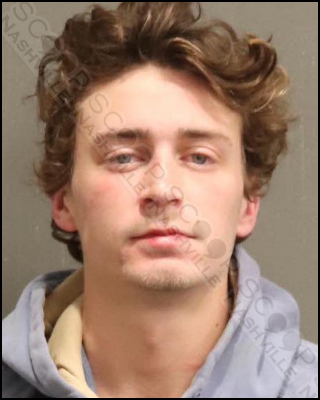 22-year-old Jacob Terry was at his mother’s home in Nashville, where he has been in a drawn-out battle with her neighbor over the placement of trash cans. The neighbor, Qiang Liu, moved the trashcans over a bit as they were directly in front of one of his windows. Late that night, Jacob kicked in the victim’s door and placed both of his fists under the victim’s chin, and threatened to beat him while yelling never to touch their trash cans again. The neighbor stated he wanted to handle this peacefully when Jacob knocked his glasses off his face. As Jacob was fleeing the home, he pushed the door into the victim, leaving him with an injury. A warrant was issued for Jacob’s arrest, and he was booked on that outstanding warrant for assault this week.

Jacob A. Terry of Sapphire Dr in White House, TN, was booked into the Metro Nashville Jail on January 4th, charged with aggravated burglary and assault. A judicial commissioner set his bond at $3,000.