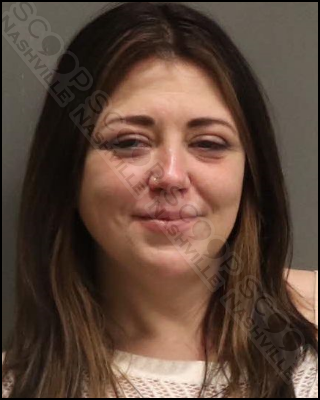 40-year-old Heather Pettit says she had “two or three drinks” prior to crashing her rental car into a car driven by Alyssa Schelnker late Tuesday night at Bell Rd & Couchville Pike. She was sitting on the guardrail when police arrived and initially denied being the driver but later admitted to crossing the yellow line and into the other vehicle, driven by Schelnker, who suffered a laceration on her hand and other injuries. She reportedly reeked of alcohol and repeatedly referred to field sobriety tests as “feel sobriety tasks,” according to police. She called her mother and ignored directives from officers, and refused to be cuffed. She was taken into custody and charged with DUI.

Heather N. Pettit was booked into the Metro Nashville Jail on January 11th, charged with driving under the influence. A judicial commissioner set her bond at $2,500, and the Davidson County Sheriff’s Office gave her pre-trial release from their facility.