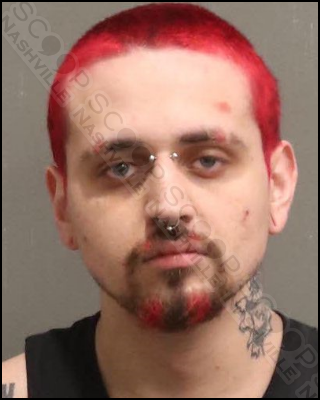 23-year-old Dustyn Odiaga was jailed on multiple outstanding warrants this week when officers encountered him during a domestic call in Antioch. Officers ran his name and realized he had an outstanding warrant in Nashville for the domestic assault of his mother from September, and a felony warrant from Boise, Idaho, will full extradition. As he was being taken into custody, Dustyn attempted to flee and was taken to the ground by officers. He continued to resist, yell, scream, and clasp his hands together under his body. He was eventually transported to booking.

Dustyn Michael Odiaga was booked into the Metro Nashville Jail on January 13th, charged with domestic assault with bodily injury, vandalism, interference with an emergency call, resisting arrest, and fugitive from justice. A judicial commissioner set his bond at $80,500 with an out-of-state hold.