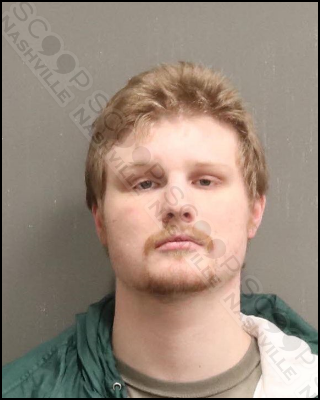 An off-duty detective with Metro Nashville Police observed 21-year-old Matthew Hugg strike the gate to the parking garage at 9 City Place late Saturday night and several pillars and parked cars within the garage. Officers made contact with Hugg, who reeked of alcohol, and observed heavy damage to both the front and rear of the vehicle. Inside the second story of the garage, officers located his bumper, headlines, a wiring harness, and paint chips strewn along the driving path. It appeared he struck several pillars before reaching the gate. Hugg performed poorly on field sobriety tests and was transported to booking, charged with DUI.

Matthew J. Hugg was booked into the Metro Nashville Jail on January 14th, charged with driving under the influence. A judicial commissioner set his bond at $1,000.