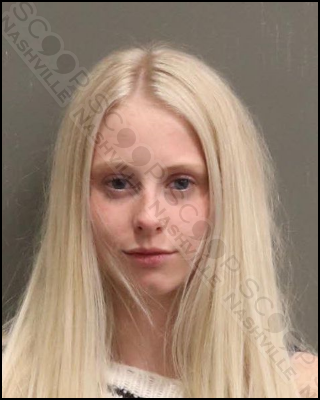 21-year-old Virginia Belser crashed her vehicle on Hwy 100 just after 5 a.m. Saturday and showed signs of impairment as officers responded to the scene. A can of beer was in her vehicle, and she admitted to having “a few” alcoholic drinks before driving — when asked to clarify “a few,” she responded it was 3-4 cans of Topo-Chico Hard Seltzer. She performed poorly on field sobriety tests and later blew a 0.203% BAC on a breathalyzer. A search of the vehicle revealed an open can of Topo Chico and a 12-pack of the drinks with several cans missing.

Virginia P. Belser of Robin Hill Rd in Nashville, TN, was booked into the Metro Nashville Jail on January 14th, charged with driving under the influence. A judicial commissioner set her bond at $1,000.