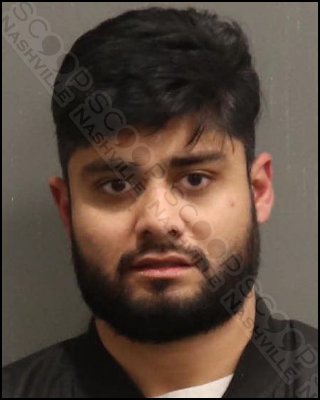 Metro Nashville Police encountered a very intoxicated 35-year-old Ateet Upadhyaya outside the Lucky Bastard Saloon in downtown Nashville on January 15 as he was repeatedly walking over to a group of strangers and interrupting their evening and being a general annoyance. Officers noted if his behavior didn’t stop, a fight would likely break out. Ateet walked away a few feet and then reached both hands out and grabbed two random individuals by their necks, assaulting them. Officers attempted to gain control of Ateet to place him into custody and eventually had to pin him against a wall to gain compliance.

Ateet Upadhyaya of Bradford Hills Dr in Nashville, TN, was booked into the Metro Nashville Jail on January 15th, charged with public intoxication, resisting arrest, and disorderly conduct. A judicial commissioner set his bond at $1,100.